Surviving the "Off Season" or Lessons in Adaptation 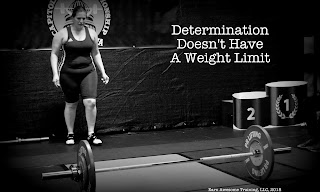 If I had to sum up 2018, I would call it the "off season" year.  Personally, we've had things to handle on the home front, from the transition of getting the kiddo into a preschool routine, to the constantly shifting schedule of the Navy, from broken down cars to sickness and back again. It's been a hell of a ride.

And I'm not the only one. Several of my athletes have had their own behind-the-gym battles to fight. And I'll be honest, for those of use who are highly kinetic, these times can be exceedingly challenging. Just one one thing is handled, another thing pops up!

It's like the year of the full-moon craziness, am I right?

Okay, maybe this is your year that you've been kicking ass through - but rest assured, there will be an off season year for you too.

The idea isn't that everyone shouldn't have an off season. The foundations of health and strength are not 'perfection'. They are not some unattainable photo in a magazine or lifting total in a competition. One of the KEYS to strength building is flexibility.This isn't the year of the barbell. This isn't the year we bring home medals and trophies and accolades. This is the year where we may pick up a kettle bell or a sand bag or a dumbbell more often. This may be the time we challenge ourselves with body weight or with the TRX. None of that is Useless.  There is NO SUCH THING AS WASTED STRENGTH.

Muscles are made by making tears in tissue, and letting it heal, and repeating the process over and over and over, in new an exciting ways.  That is how the body adapts to stress. It breaks down, and then builds up.
So let me say that again.

THERE IS NO SUCH THING AS WASTED STRENGTH.This may not be the calendar year for a new Personal Record at a meet, but this may be the year for that new personal record on a plank. Or a box jump. Or even the mental game (which, let's face is, is 80% of the game of life PERIOD).

So, yes, as a team, this has been the year of the Off Season for the lifters, but no moment has been wasted time. No movement has been wasted energy.  Mental games are being honed. The biggest test, resiliency, is just around the corner. And beyond any barbell - that is a life skill, a strength, worth building.
Posted by -J.D. Humenay at 10:32 PM