This weekend (April 28th, 2018) , my current team of Olympic Lifters and I competed in a large meet in Olympia at Fortis Sports. The meet included teams from Canada, and it was announced that there were scouts present recruiting for every division (weight class, gender, Masters, Senior, Youth, etc) for the US National team. Um - wow...

After some registration snarffles, we were all ready to go.

To sum up - I feel incredibly fortunate to be surrounded by this amazing team of lifters.

And not just because they all showed up.

But they actually showed up.
(And I am not just referring for our PR parties - but there were plenty of those!)

Let's start with the ladies -
In the first session, my 2 lifters were listed as 2nd and 3rd to begin their lifts. The first person to lift was a 9 year old girl from Canada. She had a bit of a rough patch in the warm up room, and by the time it became her turn to lift, it was clear her nerves had gotten the better of her. Who could blame her?! She was the youngest competitor by a few years, and here she was in a different country lifting FIRST! That's pretty nerve wracking! As she cried with her mom seated next to her, Dorene and Kira both took a moment to chat with her and encourage her.

I think I got a little teary here.

My lifters GET IT!
That is what this sport is all about.

Lifters genuinely want their competitors and team mates to do their best.

I find myself cheering for other lifters to make their lifts and come out with the bar overhead and 3 white lights indicating that a lift is good.  I want to see every lifter (not just mine) have a good day.


Weightlifting isn't actually about the weight on the bar, well, not entirely. It's about being better than yesterday. Better in technique. Better in score (hopefully). Better in movement quality. Better in focus.

Sure, there is a LOT of form and technique work. Not every lift is technically beautiful. (Some championship lifts are down right ugly.) But all of the lifters are fighting the same fight. No matter age or what is on the end of the bar, each lifter is doing scary and amazing at the same time.

Before they even took the platform, these women made me proud.

That's exactly the kind of character I want on my team.

Everything else that happened on the platform was gravy.

As they took the platform, everyone performed well, coming home with personal victories. 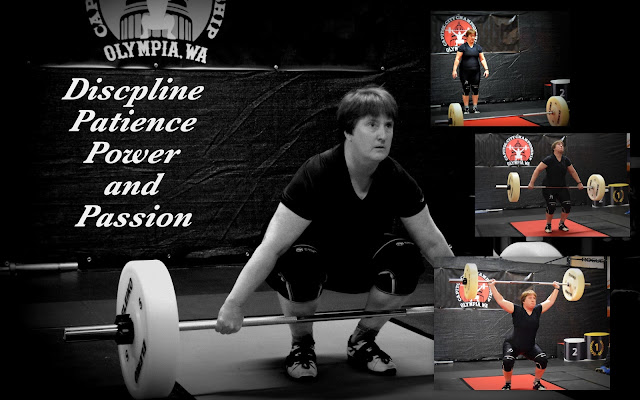 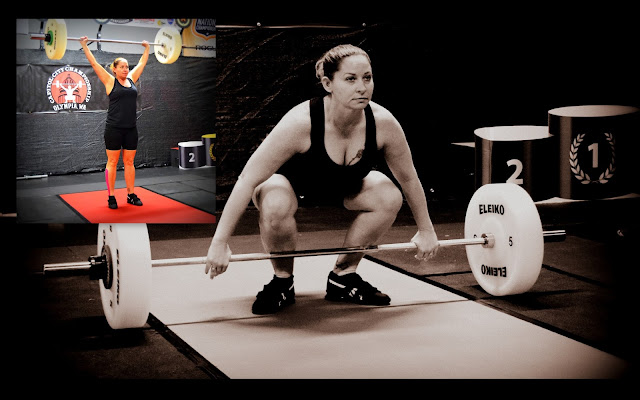 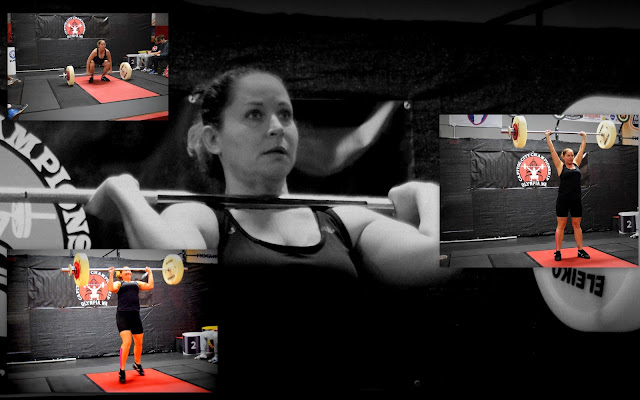 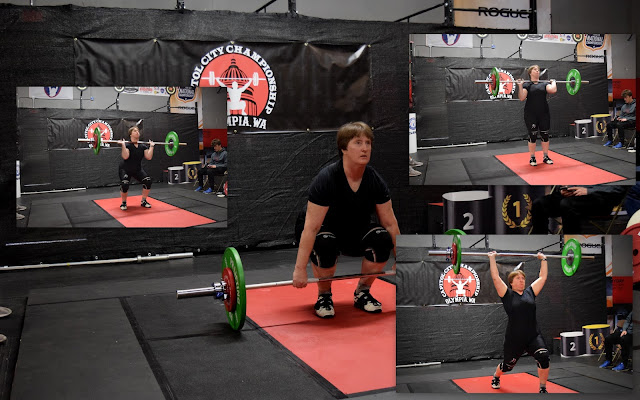 And now for the fella -
Unfortunately my awesome photographer had to leave before Emmet's turn came up, but I'm equally proud of him. Emmet has only been lifting for about 6-8 weeks, but has really put his heart into the work. As a transgender man, I was curious if I'd have to run any interference on him competing, but I'm very glad to say that the event treated him with equality and made it a non-issue.
Coaching the guys is always a fun, and different experience. I'm usually the only woman in the warm up room. It isn't until at least the first set is done that I'm reminded of how few female coaches there are in this sport. I've always found working with men just as much fun as working with my own gender, but it's moments like these that I'm reminded of how the stereotypes about lifting heavy things is still alive and well, even in this day and age.

And me -
When it came time for my lifts, my team was there to cheer me on, and I'm pretty happy with my performance as well. It had been a rough month of training, with my daughter being sick for a while, and a few niggling injuries. But maybe the rest was just what I needed as I was able to set a new record for my Clean and Jerk at a meet, and fell just a little shorter on my snatch than I'd like. I went 5/6 on my lifts though, and I'm very happy about that.

I also got to perform the last lift of the session. THAT was interesting. (For those new to weightlifting, that means I was attempting the heaviest lift of the session.) I don't think I've ever fallen that high on the totem pole before.Usually there is some other ultra heavy weight ahead of me. 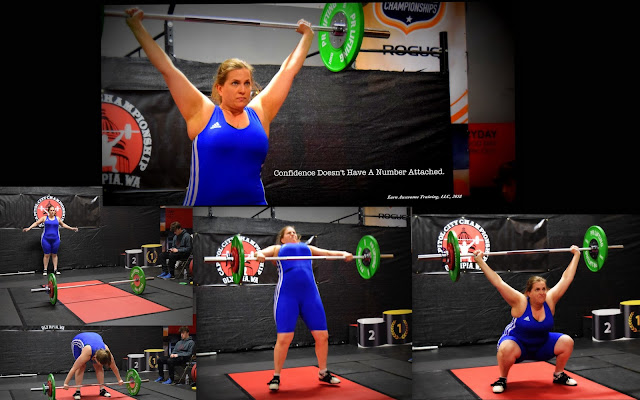 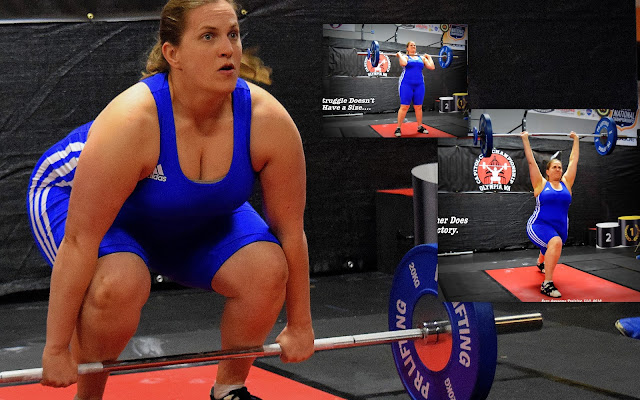 While I'm going to focus my own training this summer on shaving some weight so I can compete in a lower weight class this fall/winter, it was awesome to be a heavy lifting ultra heavyweight Masters lifter in this meet. Out of both sessions, I was the only one of my class attending. Being heavier than I'm accustomed to (and as busy as I can possibly be) has given me a lot of time to really develop a deeper understanding of body image and how much we let it rule our lives (men or women). But what if we just focused on what we could do? What if we turned all that energy and time into effort on becoming better at the things we love?

If you could do the things you wanted (like move well and feel good) would it be easier to accept the skin you're in, no matter what the scale says? Now, I'm not advocating becoming really good at eating Oreos, for example, but if you're reading this and struggle with body image, take a moment, get a little zen, and picture what it would be like to actually love your body unconditionally.

In my case, I had a clear choice -
I could walk up to the bar and cower or try to make myself appear smaller in my bright blue bargain singlet while scouts planted all over the audience judged me. That would, however cause me to be distracted from my mission.
OR
I could walk up to the bar, attempt a weight I've never tried in competition before, stomp the platform, and lead the bar in our iron dance.

I chose the latter. 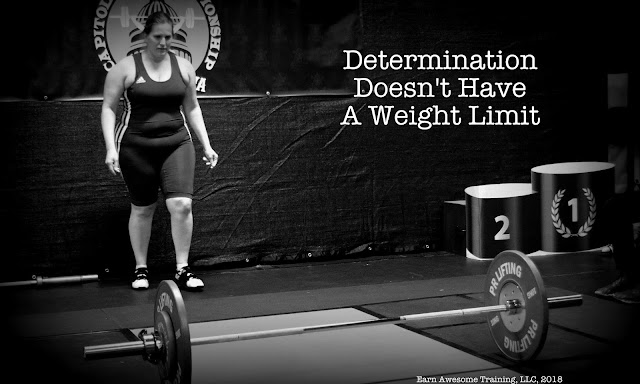